Cities are complex ecosystems that are evolving fast and — like citizens — becoming increasingly digital. By 2025, the total number of global internet users is expected to reach 6.2 billion; the total number of connected devices is expected to surpass 100 billion by the same year. These connected devices will generate 180 ZB of data per year— a fivefold increase from today. City management teams are under tremendous pressure to work faster and more efficiently as the digital infrastructure of cities rapidly evolves. They are also expected to make use of the networks of devices and the data generated, to cater to the needs of digital natives.

The creation of Smart Cities has been a major focus area of governments in recent years. However, the concept of the Smart City must evolve in tandem with the changes affecting city ecosystems. Cities typically have three core characteristics that make them smart or intelligent:

• Prediction: The ability to predict and proactively respond to events is integral to Smart Cities. Such an ability was considered the realm of science fiction only two decades ago, but with the amount of data captured and supported by Artificial Intelligence (AI) algorithms today, we are closer to this becoming reality.

Over time, city operations teams have tried to develop these characteristics by capitalizing on various technological advancements. For example, closed-circuit television cameras, sensors in heating, ventilating, and air conditioning systems, and building management systems have all been used to significantly increase city awareness. However, the siloed nature of these electronic systems has limited awareness and responses remain manual. Their limitations have slowed the shift of city operations from reactive to proactive (they will eventually become predictive). In short, the lack of integration between these individual technology elements in city ecosystems has hindered the transformation of cities into truly intelligent entities, even though the different elements evolved on their own.

Scientists believe that mankind became the dominant species on Earth because of a period of rapid brain development in the evolutionary process. Cities are going through a similar period of “cognitive revolution”— a period of rapid “city brain” development. While this revolution was triggered by the rapid buildup of sensory systems — the network of connected things — it is fueled by data.

The biggest challenge that city management teams face in data-driven city operations is deriving value from the increasing volume, velocity, and variety of data — also known as big data. To address this challenge, city operations teams are creating data models that can visualize the complex operations of city functions in real-time. These models are known as “digital twins.” Dr. Michael Grieves, one of the concept’s pioneers, defines digital twins as having three parts: physical products in real space, virtual products in virtual space, and connected data that ties the physical and virtual together.

These data models are live digital blueprints of physical assets, processes, and entire ecosystems, such as cities. What differentiates digital twins from traditional visualizations is their dynamism and real-time capabilities. Indeed, global market research firm IDC predicts that by 2023, 25% of successful Smart City digital twin platforms will be used to automate processes for increasingly complex, interconnected ecosystems of assets and products.

Digital twins can involve every tier of city management, including executive management, various operational teams (such as public transport, police, fire, emergency services, and utilities), city planners, branding and marketing personnel, and third-party partners. There are benefits that each role can derive from a digital twin: 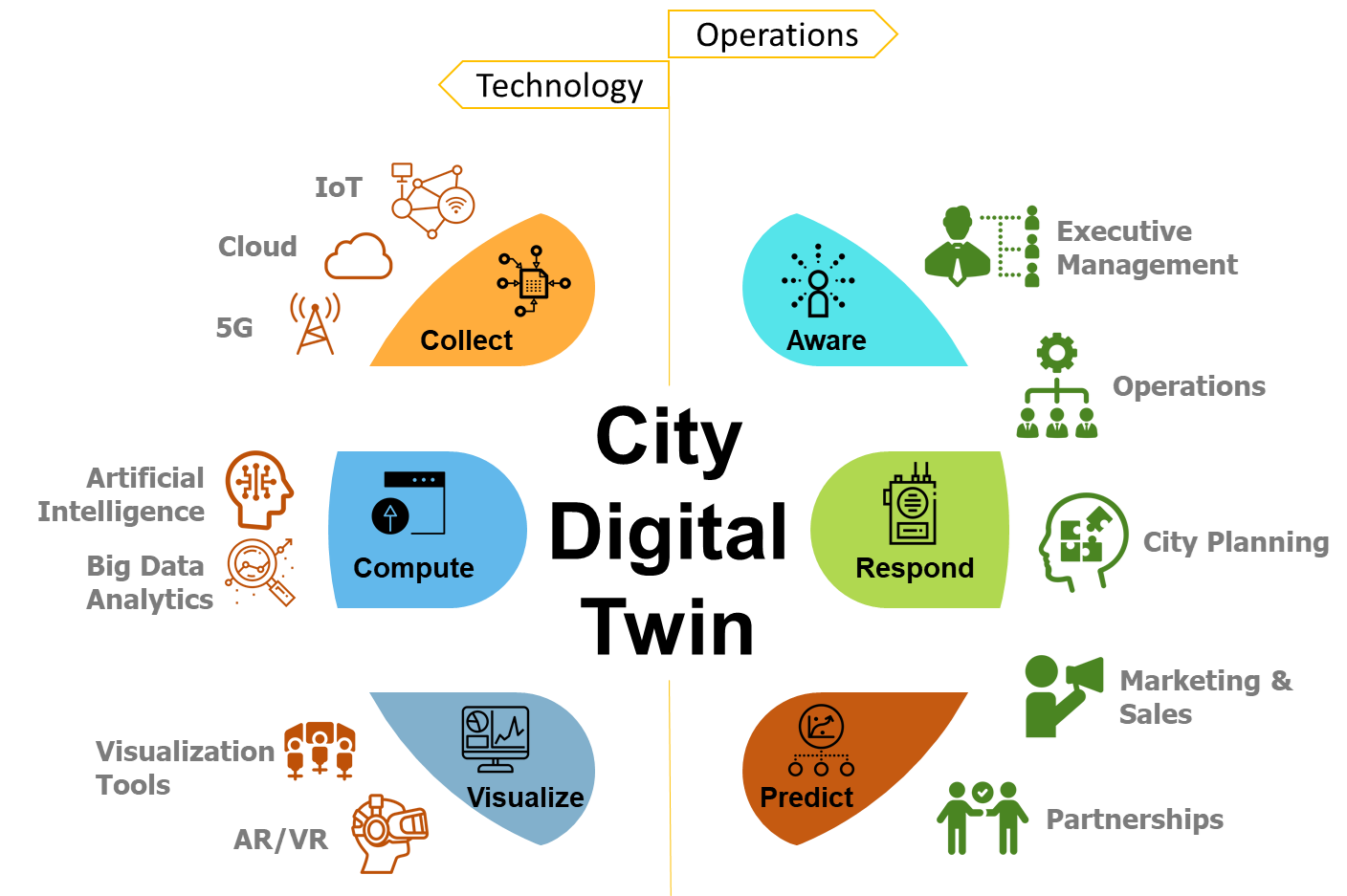 Digital twins are built and operated through multiple complementary technologies that collect, compute, and visualize data. A set of fundamental systems (such as enterprise application systems), which are already in place in most organizations today, provides data and business process support to digital twins. However, it is a group of new technologies that are usually deployed as part of organizational digital transformation efforts that enables digital twins to reach their true potential and become live data models that span ecosystems.

• Internet of Things (IoT) Edge: IoT sensors and platforms continuously collect and orchestrate the data necessary for organizations to derive value from physical assets. This feed of real-time data is what ensures that a digital twin maintains an actual live copy of an asset, process, or ecosystem. When digital twins are used to optimize operations, speed and accuracy become paramount. Distributed processing at the cloud edge becomes critical in such scenarios.

• AI and Big Data Analytics: AI, combined with analytics tools, supports city operators’ decision making and enables the automation of operational tasks. For example, an audio sensor that is part of city infrastructure can alert operations center personnel of an accident and provide a list of possible responses. This kind of sensor can also automatically trigger drone surveillance of the affected area.

• Visualization Tools: Real-time operations centers with video walls and 3D visualization tools such as Building Information Modeling (BIM) are essential components of digital twins. Augmented reality and virtual reality technologies can take these tools to the next level, enhancing the effectiveness and accuracy of digital twins. These technologies also have major implications in operations, training, design, and simulation.

• Digital Platform: A digital platform performs the integration of all these technologies, connecting applications and data to eliminate silos. The platform also connects various enterprises and ecosystem partners to fully explore the ecosystem’s value and exceed the capabilities of standalone systems.

Virtual Singapore, collaboratively developed by the city state’s various government entities, is a good example of a city digital twin. A dynamic 3D city model and collaborative data platform show aspects such as area maps and its various components — including vegetation, water bodies, and transportation infrastructure, as well as buildings and assets — in fine detail. This is complemented with different sources of static, dynamic, and real-time city data and information such as demographics, movement, and climate. This data is used by various government departments in myriad ways, simulating an incident in a stadium to formulate an evacuation plan, for example, or analyzing traffic and pedestrian movement patterns to plan the construction of a new pedestrian bridge, and real time monitoring of new construction projects. This digital twin platform is now being extended to partners and other third-party players, who can use it to create city applications that improve the lives of citizens.

Another example is Yingtan, a Chinese city that is a pioneer in building digital twins of cities. As part of its vision ‘IoT-based, Intelligent Yingtan’, the city government has built unified services based on a ‘One Center, Four Platforms’ model. The city’s 43 categories of IoT applications — covering areas such as water, transportation, streetlights, and parking — are consolidated in an IoT ‘brain’, enabling the city to build a digital twin, which will eventually improve the lives of its citizens.

Meanwhile, the UK is taking the concept to the next level by building a national digital twin, which will be an ecosystem of connected digital twins. As an initial step, the country has created a common definition for and approach to information management, to enable open and secure data sharing between future digital twins. The UK has also created Digital Twin Hub (DT Hub), a web-enabled community for early adopters of digital twins to learn through sharing and progress through practical application.

The Future of Digital Twins

Data-driven city operations have become complicated because of the volume and variety of new data sources (such as digital video and audio, IoT sensor data, social media, and biometrics). There is also considerable pressure to reduce the time taken to analyze information, accelerate the response process, and use new tools — like cognitive computing — to unearth patterns that would otherwise be invisible. Digital twins, enabled by a digital platform, have enormous potential benefits in this regard. Most digital twin initiatives within the Smart City realm are currently focused on transportation and utilities or restricted to assets or buildings. While this approach is a good start, city management teams should twin assets to processes, and eventually connect whole ecosystems, to realize the true potential of these initiatives.