Anyone who’s ever been on an earnings call knows company executives already tend to look at the world through rose-colored glasses, but a new study by economics and machine learning researchers says that’s getting worse, thanks to machine learning. The analysis found that companies are adapting their language in forecasts, SEC regulatory filings, and earnings calls due to the proliferation of AI used to analyze and derive signals from the words they use. In other words: Businesses are beginning to change the way they talk because they know machines are listening.

Forms of natural language processing are used to parse and process text in the financial documents companies are required to submit to the SEC. Machine learning tools are then able to do things like summarize text or determine whether language used is positive, neutral, or negative. Signals these tools provide are used to inform the decisions advisors, analysts, and investors make. Machine downloads are associated with faster trading after an SEC filing is posted.

This trend has implications for the financial industry and economy, as more companies shift their language in an attempt to influence machine learning reports. A paper detailing the analysis, originally published in October by researchers from Columbia University and Georgia State University’s J. Mack Robinson College of Business, was highlighted in this month’s National Bureau of Economic Research (NBER) digest. Lead author Sean Cao studies how deep learning can be applied to corporate accounting and disclosure data.
“More and more companies realize that the target audience of their mandatory and voluntary disclosures no longer consists of just human analysts and investors. A substantial amount of buying and selling of shares [is] triggered by recommendations made by robots and algorithms which process information with machine learning tools and natural language processing kits,” the paper reads. “Anecdotal evidence suggests that executives have become aware that their speech patterns and emotions, evaluated by human or software, impact their assessment by investors and analysts.”

The researchers examined nearly 360,000 SEC filings between 2003 and 2016. Over that time period, regulatory filing downloads from the SEC’s Electronic Data Gathering, Analysis, and Retrieval (EDGAR) tool increased from roughly 360,000 filing downloads to 165 million, climbing from 39% of all downloads in 2003 to 78% in 2016. 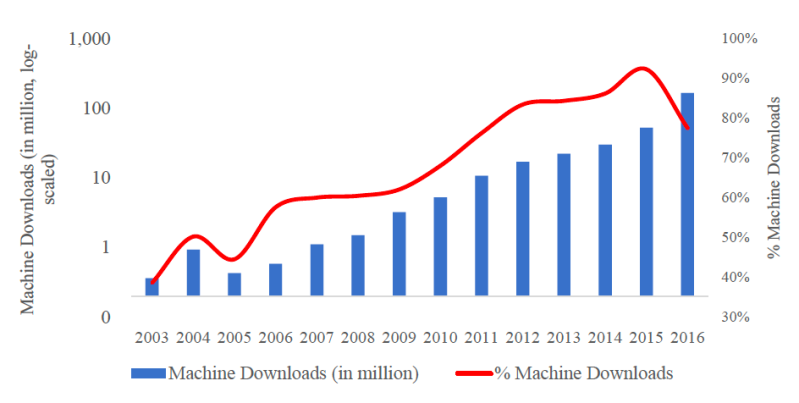 A 2011 study concluded that the majority of words identified as negative by a Harvard dictionary aren’t actually considered negative in a financial context. That study also included lists of negative words used in 10-K filings. After the release of that list, researchers found high machine download companies began to change their behavior and use fewer negative words.

“As more and more investors use AI tools such as natural language processing and sentiment analyses, we hypothesize that companies adjust the way they talk in order to communicate effectively and predictably,” the paper reads. “If managers are aware that their disclosure documents could be parsed by machines, then they should also expect that their machine readers may also be using voice analyzers to extract signals from vocal patterns and emotions contained in managers’ speeches.”

A study released earlier this year by Yale University researchers used machine learning to analyze startup pitch videos and found that “positive (i.e., passionate, warm) pitches increase funding probability.” And another study from earlier this year (by Crane, Crotty, and Umar) showed hedge funds that use machines to automate downloads of corporate filings perform better than those that do not.

In other applications at the locus of AI and investor decisions, last year InReach Ventures launched a $60 million fund that uses AI as part of its process for evaluating startups.