An AI capable of express yourself with teasing and even flirting. That’s the power of Sonantic’s AI-generated voice, which has managed to mimic more complex aspects of human speech to make itself more convincing.

According to the company, the key is that this AI incorporates sounds that are not directly from speech, as it is trained to recreate details such as small exhalations (where you can mock or laugh) what they give your voice greater authenticity.

Here you can listen to the voice of the Sonantic AI

According to Sonantic co-founder John Flynn, the goal of their research was to see if they could model subtle emotions that weren’t so easy to capture. In the video, you can see how the AI ​​can extend the duration of some wordslaugh and add exhalations to make it friendlier to the listener (seeming at times the voice of a person).

Adjusting every detail of the expression

According to CEO Zeena Qureshi, its AI is like comparing “Photoshop for voice,” where the interface allows users to write the speech to be synthesizedand adjust the mood, in addition to selecting a catalog of voices, which are mostly made by copying those of real human actors. 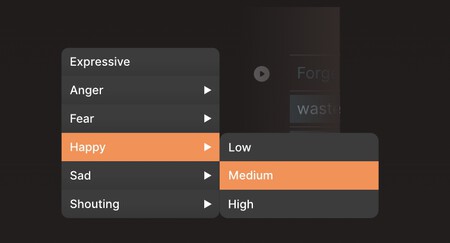 Among the configuration options you can adjust anger, fear, sadness, happiness, joy and with its latest update too coquetry, shyness, teasing and even the ability to boast. It even has a director mode that has greater control of the voice, being able to modify the tone, intensity and vocalizations that are not pronounced, such as laughter and breathing.

The intent of this technology is to use the actual audio reference coming directly from your learning models, and not from products that are already polished and ready for public demonstrations. However, the synthesized speech for the video, according to Flynn, required very little manual fine-tuning, which was done through a cycle of different renderings, until they hit on the best result.

You can also change how loudly you project your voice.

The resemblance to Scarlett’s voice johansson It is intended

The voice of the AI ​​from the video is inspired by the voice of Samantha (played by Scarlett Johansson) from Spike Jonze’s 2013 film Her, where the protagonist falls in love with his virtual assistant. Sonantic also points out that they are aware of the ethical dilemmas posed by this technology and that they are careful how and where they use their AI voices.

Qureshi says that until now they have focused on the entertainment section, although this does not mean that it cannot be used to generate voices for deceptive purposes, although it can also be used for other types of environments, for example for the voices of chatbots with which people already interact, to make communication more natural and organic.