The energy transition requires critical minerals. Though the U.S. has plentiful resources of its own, the country has largely relied on foreign sources.

That’s in part because one major roadblock to accessing American critical mineral deposits is that they remain largely unmapped. That may be about to change, though.

The Department of Defense and the U.S. Geological Survey have issued two separate challenges to explore using artificial intelligence and machine learning to expedite USGS’ task of assessing the availability and mining potential of 50 critical minerals. The challenges are enlisting the help of outside researchers and AI developers to solve a vexing problem.

The end goal of the challenges is not to automate the assessments entirely, said Graham Lederer, a research geologist at USGS’ Geology, Energy and Minerals Science Center. Rather, it is to come up with a way to use AI to accelerate the process of digitizing long-buried maps and other data and use them to understand the landscape of the country’s mineral resources.

“Right now, we do this basically one commodity at a time or one mineral deposit type at a time, because it’s so manual and it takes a lot of human effort,” Lederer said. “But if you set up the machine learning algorithms well and generalize the solutions well, [we] could be doing all 50 commodities simultaneously, which would be transformative in how we work and the pace at which we work.”

A map of the locations of critical mineral deposits in the U.S.Image: USGS

While the government’s geologists and its military technology researchers may seem like strange bedfellows, the collaboration could allow the former to speed up the geological assessments that are the first step in building out a domestic critical supply chain. Given the national security implications as well as the need to deploy clean energy technology as quickly as possible, that mission has added urgency.

“Part of the problem is that we collected so much data 70, 80, 90 years ago, before digital data collection was possible and effective,” said Joshua Elliott, a program manager working on information innovation at DARPA, DOD’s research arm. “We’re kind of behind because we were so far ahead. So much of our data is actually locked in these incredibly valuable and incredibly detailed maps that were produced by [USGS experts] two generations ago.”

There are essentially two steps — corresponding to the two challenges — that are required to actually use the existing maps to locate minerals. The first is, Elliott said, “extreme precision georeferencing” to digitize hard copies and scans of maps into a format that is usable. Then, researchers need to extract important features like fault lines and geological formations to figure out where mineral deposits might sit. By hand, this would be a painstakingly long process, but Elliott said AI and machine learning have the potential to “make a substantial dent in” the time it could take.

A before-and-after image of an economic geology map of Jackson Peak, California, from 1894 that’s been digitized.Image: USGS/DARPA; Protocol

At the moment, Elliott said, the agencies estimate that roughly 10% of the USGS’ core database of 100,000 maps have been partially digitized, and an even smaller share have had the data extracted in a way that is usable.

But time is of the essence. The Energy Act of 2020 set a goal of completing all critical mineral assessments in four years. That’s how long it can take the USGS to assess the availability of a single mineral, though.

“That requires an order of magnitude increase in the efficiency,” Lederer said. “We have a lot of the tools, but we need to scale those tools up to really be able to do this and in an efficient way, and that’s where the artificial intelligence and machine learning efforts come in.”

The task is not an easy one, though, according to Asitang Mishra, a principal data scientist for NASA’s Jet Propulsion Laboratory’s AI and analytics group, who has closely examined what kind of AI tools might be needed. AI or machine learning are well-suited to highly repetitive analysis that would take a human hours, if not days, he said, which bodes well for the new effort.

The challenge is an opportunity to draw on the expertise of researchers who have the skills to use AI to digitize the existing data or extract the relevant features and “tap the broadest segment of the innovation ecosystem that’s out there,” said Elliott. This could include private sector mining companies, university research groups or even individuals. For each challenge, DARPA is offering $10,000 for the first prize, $3,000 for the second and $1,000 for the third.

For the georeferencing challenge, groups and individuals participating will be given 1,000 or more maps for AI to learn from. To succeed, the challenge announcement says teams will have to “accurately geolocate a map of unknown location and coordinate system by fitting coordinate points that can be referenced to known locations in one or more base maps.”

For the feature extraction challenge, participants will be given maps and labeled legends. They’ll use them to train AI to identify features that could be used to identify mineral locations.

Even if no clear answers to the USGS’ predicament emerge from the challenges, Mishra said at least the agencies will have a better sense of where the gap in using machine learning for these tasks is.

Ilya Jackson, a postdoctoral associate focused on applying AI to supply chains at the MIT Center for Transportation and Logistics who is not affiliated with the challenge, said the effort is “a step in the right direction” and “worth trying,” but its success will depend on the quality of the data.

“If you have a project that has lots of high-quality data, AI will work and it will be easy to implement,” Jackson said.

Ultimately, DARPA’s plan is to create a grand multiyear challenge that will involve enlisting the teams that are already familiar with the task of map digitization and extraction to use AI and machine learning to actually do that work. This first step, Mishra said, is “just understanding the waters.”

The highest priority minerals are those needed for the energy transition, and especially by batteries. Nickel, manganese, lithium and graphite are vital in that regard, and competition for these on a global scale has become increasingly stiff. China, Elliott said, has been actively accelerating its mining capacity, and now dominates the supply chains of many of them. 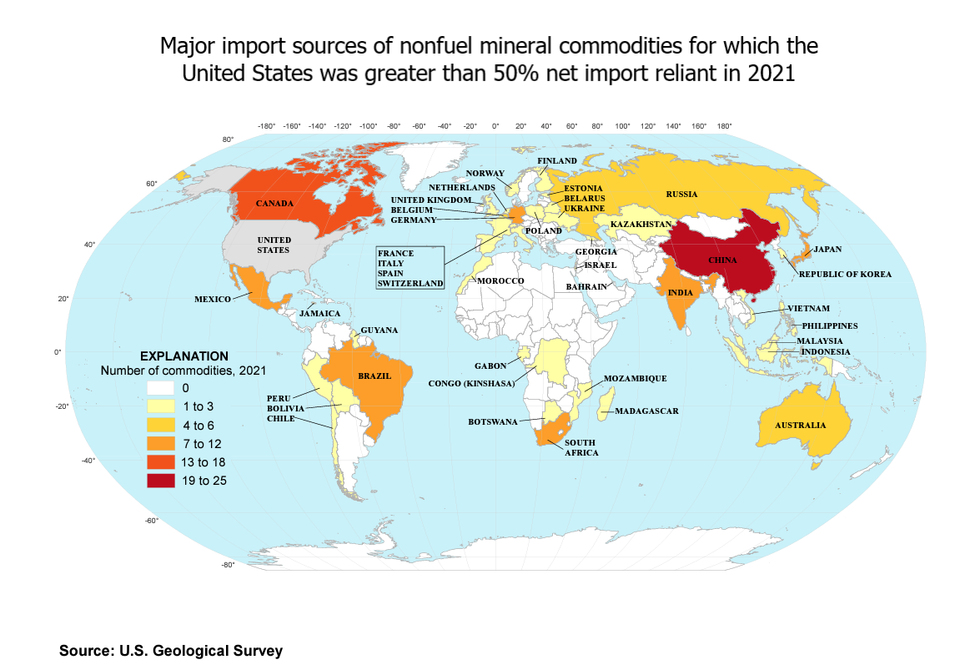 “There are certainly some concerns that have been expressed across the U.S. government about whether or not our dependency on them creates a strategic disadvantage,” Elliott said. Russia is also a major source of critical minerals, as are other countries without democratically elected leadership, which could create further supply chain vulnerabilities. In the Democratic Republic of the Congo, for instance, the two biggest cobalt mines were once owned by U.S. companies, but have since been sold to Chinese companies, which has compromised strategic availability of those minerals. One of those companies is under investigation for allegedly flouting royalty payments.

The U.S. building out its own critical mineral supply chain could mitigate some of those risks and help allies as they look to speed up their own clean energy transition.

AI could help answer those questions sooner than later. DARPA will announce the winners of the challenges next month.