Is the best thing you can draw with a pen or brush something that looks like a 3-year-old’s kindergarten homework?

Enter the age of text-to-image art generators. With a few keywords, ta-da! A picture generated by artificial intelligence (AI) is created.

The ease of it all unsettles 2D designer Lily Liu a bit. She works for a game studio, where her daily routine is to design user interface and create artworks for games on mobile devices. Recently her boss instructed her to study artificial intelligence art generators.

A week later, she came to the dismal conclusion that her current job might one day become obsolete, subsumed to large degree by a computer program.

“I have to admit that such AI art generators are very, very capable,” Liu said. “They make parts of drawing work so much easier that I don’t think any company will be able to resist them. They save time and manpower. With them, it’s possible for one artist to do the job of three or four.”

Liu tried all the popular available artificial intelligence art generators, including Midjourney, Stable Diffusion and Dall-E 2. She tried different styles of works, such as impressionist, realist and Japanese animation. 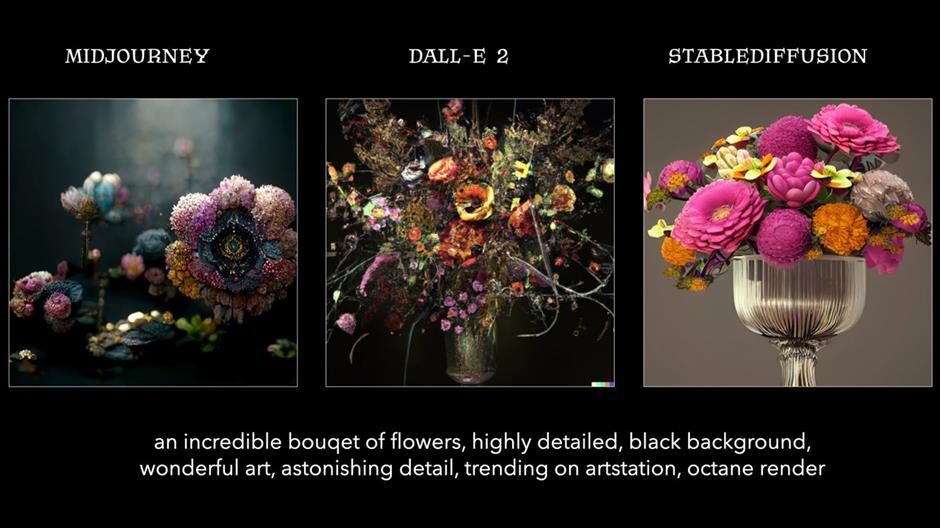 “From my experience, these art generators are good at creating background pictures that focus on overall atmosphere as well as light and shadow effects, such as wild scenery and city views,” Liu said. “Sometimes, such pictures don’t even need any modification. I assume they could be applied widely in areas such as graphic design and novel illustrations.” 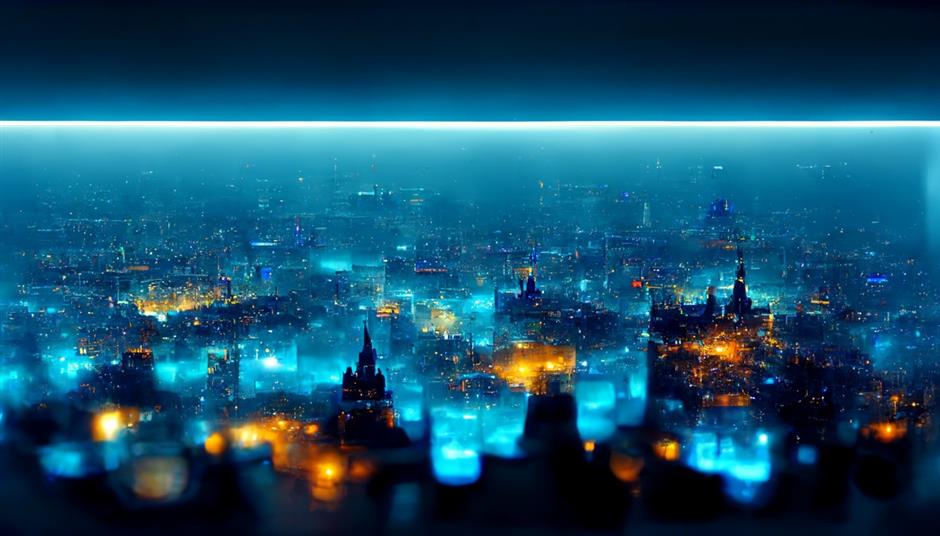 A picture drawn by an artificial intelligence art generator. The keywords of the picture are: city at night, top view, and blue lights.

But the machine artists are not perfect. They are still not “smart” enough to generate a certain object, a logo or Japanese anime-style figure that is ready to use.

“As pictures generated have only one layer, it’s difficult to make modifications on them,” Liu said. “They’re not helpful when it comes to high-quality requirements, such as drawing animation characters.”

Animation-style characters generated by AI are usually not allowed to be used in professional works.

“I believe one day AI art generators will overcome any drawbacks and, like it or not, artists will have to accept that fact,” she said.

Art created by machine drew widespread attention in 2018, when the picture “Portrait of Edmond de Belamy,” created by a French team, was auctioned for US$432,000 in the UK. The picture was generated from the data of 15,000 portraits created from the 14th to 20th centuries. 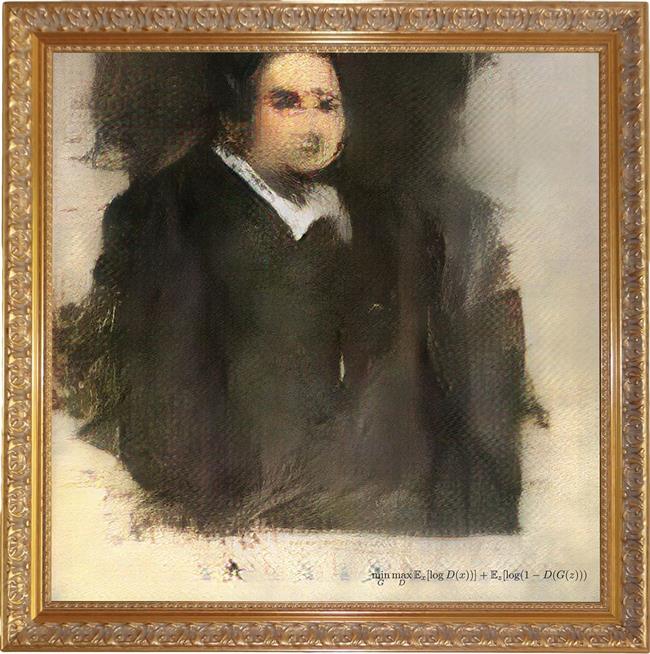 Last month in the US, Jason Allen won a prize in digital-assisted art at the Colorado State Fair’s fine arts competition with his entry “Théâtre D’Opéra Spatial.” But it turned out the work was more than just “assisted” by technology. It was created by it. After the prize was awarded, it was discovered that Allen had produced the artwork using the AI art generator Midjourney.

Artists and others reacted with outrage, calling his work “cheating.” 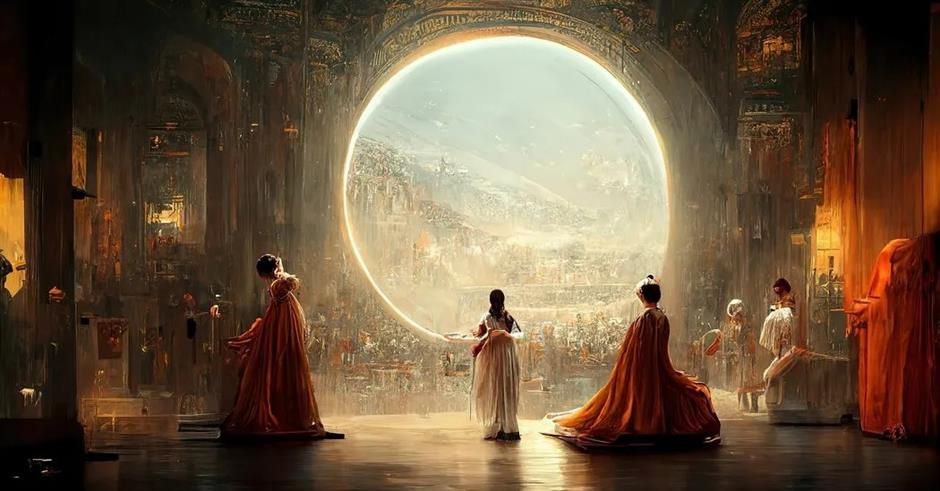 “Théâtre D’Opéra Spatial,” a picture created by Midjourney that won a digital painting contest in the US

It’s an outcry heard across the world by those who believe that machine art is nothing short of high-tech plagiarism. Developers feed millions of existing artworks into a machine so that it can “learn” the relationship between texts and images. The original artists are typically not paid for the use of their works.

Earlier this month, South Korean illustrator Kim Jung-Gi, who is known for his large, highly detailed illustrations and skill at drawing from memory, died of heart attack in France.

Just a day after the news broke, a Twitter user with the screenname “5You” claimed that he “trained” an artificial intelligence model with Kim’s works and shared it online as an “homage” to Kim.

“I’m fairly happy with the results, given how complicated his style is,” he wrote. “I’d prefer if, yes, you’d give me some credit if you use it because making such a file is hard work and I’m giving it to you.”

He soon faced angry backlash from netizens, who decried his efforts as an improper way to pay tribute to Kim. 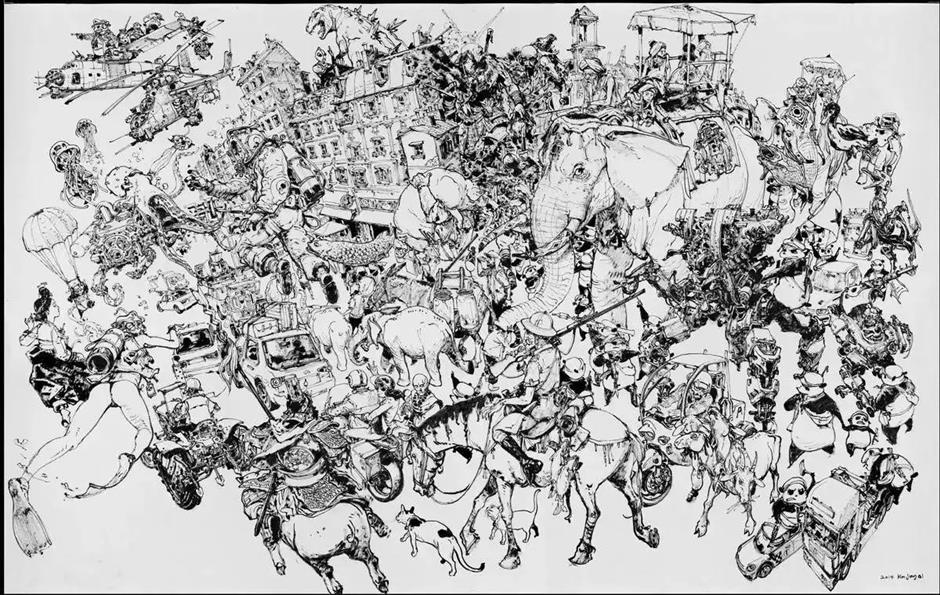 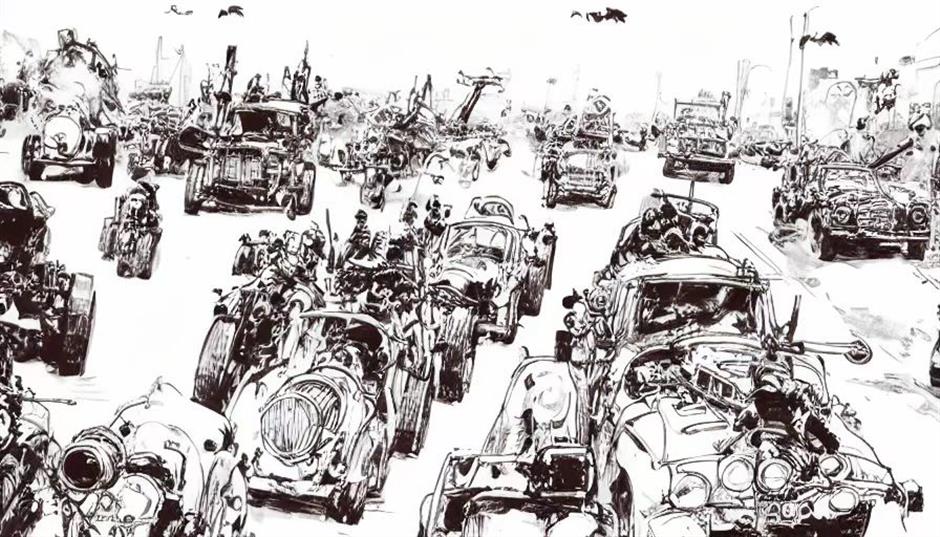 Above: an authentic artwork created by late South Korean illustrator Kim Jung-Gi. Below: a picture drawn by a computer trained from Kim’s works.

Where do you draw the line?

This week, when a South Korean artist was livestreaming a painting online, a viewer screenshot the unfinished work and fed it to an AI art generator, then posted the resulting picture on Twitter before the artist could finish his work.

The incident provoked another wave of condemnation. 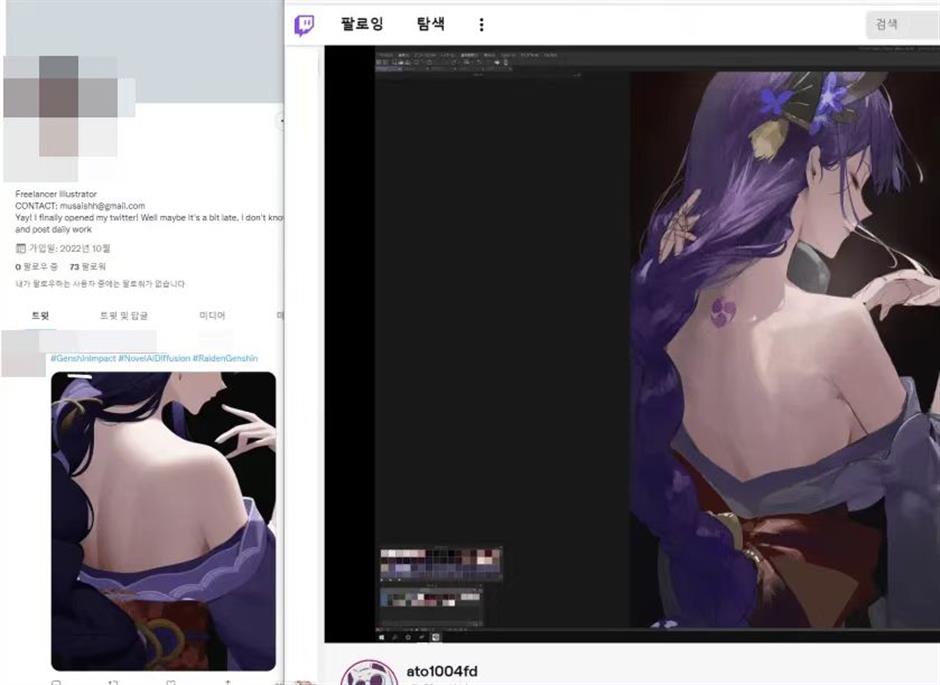 When a South Korean artist was livestreaming painting (right), a viewer screenshot the unfinished work and made an AI art based on it (left). The incident provoked much condemnation on Twitter.

So are these machine artists art thieves?

The jury is still out on that question.

Lawyer Wang Renxian, on his WeChat official account, said if a picture generated by artificial intelligence looks very similar to any existing artwork, it might be defined as a copyright infringement.

Although no existing cases on such art disputes are available for reference, cases involving AI written texts have been settled in courts.

In 2019, technology giant Tencent filed a lawsuit against Shanghai Yingxun Technology Co, accusing the company of pinching an original article created by Tencent.

The article was written by “Dreamwriter,” an artificial intelligence writing program developed by Tencent and published on a Tencent official website. Yingxun subsequently pasted the same article on its own website.

The People’s Court of Nanshan District in Shenzhen decided that the original Tencent article was classified as “literary output” and thus protected by copyright.